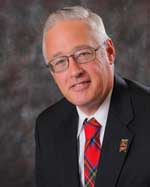 A 1989 Edinboro University graduate with a Bachelor of Science degree in Industrial Trades Leadership, Mr. Frampton also earned Associate of Science degree in Supervision Technology at the University of Pittsburgh, Titusville. He was president of C&J Industries, a Crawford County plastics manufacturer and product design company specializing in complex, high-precision injection molded components and assemblies, until his retirement in 2016.

In addition to his volunteer efforts on behalf of EU, Mr. Frampton has long been active in Meadville and Crawford County civic organizations and philanthropic and service clubs and is a past chairman of the Precision Manufacturing Institute and past president of the Meadville-Western Crawford County Chamber of Commerce. He also serves on a facilities and steering committee at Camp Ho Mita Koda, a summer camp for youth with diabetes in Newbury Township, Ohio.